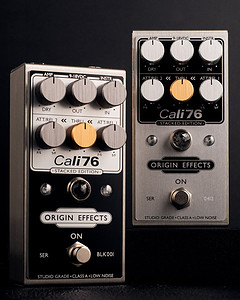 Inverted Black compressor. It may only be a fancy new finish for an already popular pedal, but it seems like a good excuse to tell you why we think it’s awesome, and why more is more when it comes to compression.

For some years now, Origin Effects have been dining out on our Cali76 compressor circuit – a perfect recreation of the legendary UREI 1176 studio compressor – and with good reason. It’s probably the most well-known and well-loved compressor in music history, and a studio-grade sound that many players find indispensable once they’ve experienced it on their pedalboard.

Origin Effects founder, Simon Keats, first began the quest to recreate the 1176 sound when chasing the tone of Little Feat slide maestro, Lowell George, who famously used two 1176s at once! This dual-compressor signal path has always been part of the Origin Effects range, but all that experience is brought together in the Cali76 Stacked Edition. Not only is it an enormous amount of fun having access to this much compression, but it also provides an unparalleled level of control to players who find a single compressor’s controls somewhat limiting (both puns intended).

When using a single compressor, there are two main approaches you can take – the snappy-and-funky approach or the generally-fattened-up one. In the first instance, one would use a slower attack time and a faster release, just compressing the peaks of the signal. The advantage of this approach is that the compression is obvious, lending a really punchy character to the transient parts of the sound. The disadvantage of just compressing the peaks is that, as soon as you start playing softly, your signal drops below the compression threshold and stops being compressed at all – it’s just back to its boring old self.

The other method compresses a lot more of your signal, not just the peaks, and uses a fast attack so that the overall dynamics of the signal become much more even. This has the effects of fattening up the whole sound and increasing sustain, even when playing softly. All the quiet details of your playing are exaggerated and brought to the fore. The downside is that you lose the percussive feel and liveliness that you achieve when just compressing the peaks. The answer? Do both!

The Stacked Edition features two complete Cali76 compression stages, with controls optimised for flexibility. Independent ATTACK/RELEASE controls for each stage allow you to dial in the two compression circuits separately, letting you simultaneously use the two compressor settings described above (or any other settings you want). The THRU knob dictates how hard the first stage is hitting the second which, in conjunction with the IN control, gives you full command over how much of the signal is being compressed by each stage.

This means you can set Stage 1 to a snappy-and-funky sound, then use Stage 2 to generally fatten up the resulting sound so that none of the quieter details are lost. You can balance punch with sustain and be confident that you’ll never get lost in the mix, even when playing softly.

So far, we’ve only covered what is quite a sensible use of dual-stage compression. But what if we crank everything up? This is the Stacked Edition’s party trick – what we like to call “clean overdrive”. Boosting the IN and THRU controls and setting fast ATTACK times on both stages will give you all the sustain and response of a highly overdriven lead tone, but completely clean! It’s an unusual sensation at first, but perfect when you need a singing lead tone without reaching for the gain knob.

Just to keep things vaguely sensible, we’ve included a DRY control, allowing you to blend back in some of your uncompressed sound. This can help restore some of the natural dynamics of your playing, whilst still retaining the character of a really over-the-top compressor. This method – parallel compression – is a tried and tested studio technique and it works just as well on your pedalboard.

There’s so much more we could write here but, really, Dual-stage compression has to be experienced to be believed, whether you’re motivated by versatility or merely by unashamed greed. After all, we all know how addictive compression can be.