Welcome to the first Origin Effects Artist Profile. In this series, we are giving you a window into the lives and work of some of our favourite artists. First up, we have Grammy-winning producer and long-time friend of Origin Effects, Mike Exeter, who has had the privilege of working with some of Rock and Metal’s biggest names. 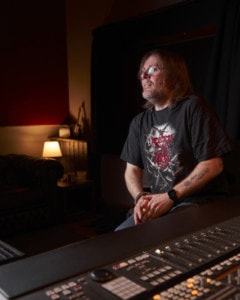 For those who don’t know you, tell us who you are and what you do.

“My name is Mike Exeter and I am a Record Producer. My job is to take the artist’s creative vision and turn it into reality. This can encompass everything from songwriting and arranging, psychology and mental support, engineering and mixing, playing and programming. I am known for working in Rock and Metal but love many other genres, and my goal is ensuring that the song and the sonics are given the love and attention to make them the best they can be as recorded works.”

Where did you start with music, what’s your origin story?

“I was given a recorder at school (the wind instrument, not tape!!) and learned to play it. I was introduced to Tubular Bells and Dark Side of The Moon by my dad and learning the piano through my mum’s dad. During the 1970s when I was growing up my first records were Journey to the Centre of the Earth (Rick Wakeman), Oliver’s Army (Elvis Costello), Tubular Bells (Mike Oldfield) and Dark Side of the Moon (Pink Floyd).

Playing piano made me interested in how music worked and, along with a love of electronics and the newly available microprocessors, I developed an interest in knowing what went into making records. A chance picking up of a magazine called Recording Engineer and Producer (I think) back in about 1984 exposed me to the professional world of production and studios. I was hooked.

By 1990, I’d had enough of electronics and computerised machines and robots in my dad’s business and left to pursue a degree in Engineering (Recording Arts) in Florida at Full Sail. After graduating and spending a year at a studio in Rochester NY, I then returned to the UK and freelanced for a while, eventually becoming Head Engineer at UB40’s DEP Studios in Birmingham.” 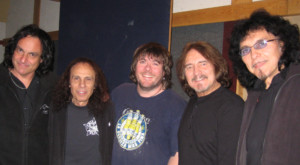 What have been your biggest projects and what was it like working on them?

“During the mixing of a Cradle of Filth record, I was introduced to Tony Iommi from Black Sabbath and thus began a friendship and working relationship that continues to this day (26 years and counting). Whilst retaining a freelance status, I have been fortunate to work with many of the legendary musicians with whom Tony has been involved over the 26-year period, including Ozzy, Ronnie James Dio, Ian Gillan, Geezer Butler, Bill Ward, Glenn Hughes, Jon Lord…” 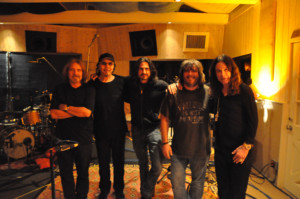 Notable projects within the Tony ‘world’:

“All the above projects hold incredible memories and I’m hugely proud of my involvement in them. They all had individual challenges and pushed me to the limit of my mental and physical fortitude. You have to live and breathe this job and sometimes you can go too far. Near death and hospitalisation back in 2014 stopped me in my tracks but it also made me revaluate and come back stronger, with a new knowledge of myself and a wider understanding of the mental side of the industry and artists in general.” 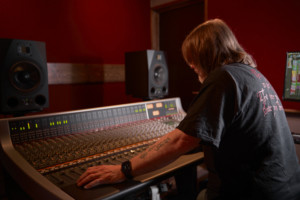 What does it mean to be a producer?

“You have to understand that this is someone’s inner soul being laid bare and you are there to help them unleash that emotion on the world. If there is ever anything that you can do to make it the best you can, then you have to do it. We have every conceivable tool at our disposal nowadays to ensure that no stone is left unturned. Laziness and complacency have no place in my world.

What do you enjoy most about the process?

“I love most aspects of production, but I love seeing the ‘WOW’ moments from the artists. This can be an arrangement thing, or a wonderful first playback of a performance, but also just crafting sounds that make the hairs go up on the arms. Shutting my eyes and listening to something that moves me in the same way as hearing my favourite record for the first time as a kid (Animals by Pink Floyd, in case you were wondering) gives me the hope and anticipation that maybe what I have just produced will be exactly that for someone else when they first hear my work. I keep doing this because I love creating worlds and places to evoke the emotion that only great music or art can create.” 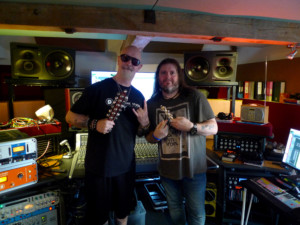 When working with bands, how do you find the right sounds for a record?

“Listening to the band live can really inform how the record will sound. I will encourage the band to rehearse live and we will do arranging and songwriting in pre-production sessions. Once we hit the studio, everyone should be on the same page and we begin to record as live as possible to capture the energy and essence of who the band is.

The process of capturing the sounds is a combination of problem solving and creative endeavour. I’ll use various methods to ensure as much “off the floor” performance can be kept for the record. Using gear that keeps the artist in their comfort zone whilst still allowing them to be gently pushed is critical so I have a bunch of options for them – especially guitarists and bass players who may be more or less receptive to different ‘amp’ technology.”

How do Origin Effects fit into your world? 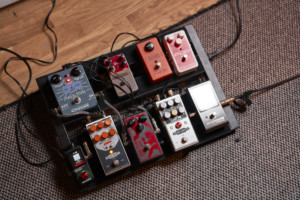 “Having analogue electronics and physical controls makes for very comfortable tweaking to find sounds that inspire players. I love my pedalboard, with some “front end” stomps into the RevivalDRIVEs and either out to amps or IR loaders. The ability to go “silent” in smaller studios no longer requires the choice to only be digital modellers or amp heads into reactive loads, now I have the extra fun choices of boutique amps in small, solid state pedals that react like their inspirations. Guitarists love the playability of the Amp Recreations and immediately ‘get’ them and start to feel creative. Bassists now don’t have to schlep massive amps and 8×10 cabs to get the full experience.

It looks like I will be building more pedalboards as it doesn’t seem like I’m going to be able to stop at just a couple of Origin pedals. Being a huge fan of modulation, I am already looking at the MAGMA57 and DELUXE61, which perform totally differently to my other modulation pedals. Origin pedals help me get the sounds that inspire my artists to create their most enduring and passionate work.”

To keep up with what Mike is doing visit his website where you can find more photos and links to his socials: www.mikeexeter.com