Who are you and what do you do? 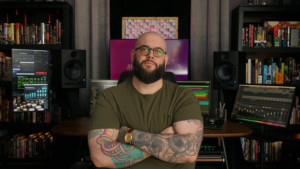 I’m Jesse Zuretti, an award-winning film, series and game composer, most notably for Marvel over the last 4 years. I work full-time to be a part of creating stories for productions, using various instruments and tools. I also compose for producers and bands, such as Jens Bogren (Opeth, Devin Townsend) and Dave Otero (Archspire, Cattle Decapitation). I was musically born and raised in the metal world, which absolutely affects my melodic and tonal choices when composing. The most exciting agenda of mine is when I’m able to add my background in metal into scores for the films, series and games I work on – which has happened a handful of times, fortunately!

Where did you start from, what’s your origin story?

Working with Marvel has been such a weird story to tell because it kind of sounds made up. Generally, in my line of work, folks tend to go down a few roads. You attend a prestigious school for composing, like University of South California, work your way into an assistant position, and then work your butt off until you get additional music in a film or series, and then eventually start doing your own. Or you bang your head on your composer desk for years and years, networking, growing your skill sets, becoming a truly proficient storyteller with music, and eventually make the right connections to get a gig as a composer for a film. Both of these routes have such incredibly different varieties of outcome, not to mention variables that change the paths along the way.

Me? I was on tour in 2016 with my band Binary Code supporting our friends in Leprous and met the right people at the right time, which turned into an opportunity to do work with Marvel. I took the risk of becoming a full-time composer and quit my day job as a Creative Director for a musical instrument company, and set a fire under myself to get moving. The production I’m most proud of is my start-to-finish work composing & sound designing for a two-season Marvel animated series that won a 2020 Webby Award.

As a guitarist, I started out in 2002 at the age of 16, aiming wayyy too high with what I wanted to learn at first, which I think played a role in evolving quickly. I wanted to play Between the Buried and Me, The Red Chord, Dillinger Escape Plan, Opeth, Suffocation, Ion Dissonance, Strapping Young Lad, Pantera – you know, stuff GREAT for beginners! But I also have a dad who was hooked on insane musicians and music, so I also wanted to learn music by Pat Metheny Group, Allan Holdsworth, Wayne Krantz, Frank Gambale and Frank Zappa. Of course, I’d fail pretty miserably to play most of this stuff, but I sure tried. From time to time, I’d give myself a break and focus on stuff that was more reasonable: Stone Temple Pilots, Soundgarden, Radiohead, Porcupine Tree, Alice in Chains. Eventually all of those influences made their way into my band and my personal music over the years in small dribs and drabs.

What challanges do you face when writing music to fit established characters?

The biggest challenge is reading! In order to truly understand characters, you really need to do full forensic profiles of the characters – which I’m sure a lot of folks in my line of work don’t realize they’re doing. And that requires a lot of reading and research. The hardest part about working with time-sensitive productions is the time itself. There are so many steps you need to take to do a great job and time is often of the utmost essence. One of the main reasons composers get the job is because of their predisposition for the subject of the production. The more you know about the story in advance, the better because you can nerd out – passionately – about the story with the production team. So, it’s safe to say, if you get the gig, you get the story. The rest is pure experimentation and trial and error. 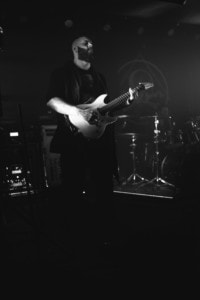 Enough about Marvel, tell us about producing bands.

Strangely enough, my work with bands is strictly on a compositional level. I’ve produced a few bands in the past, as well as my own, but I leave the production up to the experts and the impassioned! I do find working with bands to be much easier in terms of composing, but it’s much more difficult in terms of finding the right places for it. And in metal, as we all know, it’s jammed with more notes than one knows to do with, so that can be a real challenge!

One of the main differences between working on a film or series compared to with bands or producers is the structure. In film, a scene may not have a tempo that jumps out at you. You have to spend time figuring out what the tempo is. A band has the tempos all mapped out…hopefully! The confines of band music are actually a huge relief compared to pace-detecting in a film. If you think about it, what tempo is a car chase? What tempo is a World War 2 battle scene? What tempo is a dramatic scene between two people arguing? What tempo is a scene where a ravenous zombie is chasing someone through the woods? Bands and producers are a cakewalk, which I actually love about working with them!

More similar to bands and producers are video games. There’s a variety of approaches to scoring a game, but the ones I’ve worked on are all procedural, which means loop-based, with some exceptions. This allows for pretty determinable tempos and tones that are a bit easier to figure out than film. But it also requires a much more tech-savvy skill set for implementation into the game itself, which is a whole other challenge unlike film or tv.

The film/series, record production, and video game industries have amazing people working in them, and it blows my mind how good people are at their jobs – and have been for decades. 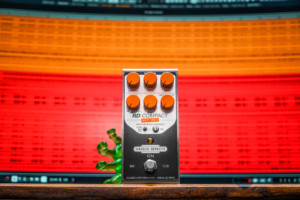 How do Origin Effects fit into your work, both when recording at home and performing live?

One of my favourite things to do is run synths through pedals. I recently ran an insane analogue synth sound through the Origin Effects RD Compact Hot Rod overdrive pedal, and it was absolutely amazing for the job. In designing synth sounds for something like a science-fiction/fantasy space battle, I rely so heavily on experimentation. Nothing to me says experimentation like synths running into pedals. For some of the metal-inspired game music I’ve written I rely so heavily on polished tone for inspiration. At this juncture, the RD Compact Hot Rod pedal is on my desk next to my daily-use tools for composing and working. Everything else is on a shelf waiting for its time.