Origin Effects is celebrating its 10 year anniversary! To commemorate the occasion, we are offering our entire range of compressors in a stunning, limited edition, laser engraved aluminium finish, inspired by the subtle look of our in-house prototypes.

Things have come a long way in those 10 years, from one man with a mission to make the best compressor to a range of high-quality analogue pedals, revered by many as the world’s finest guitar effects. Let’s look back on the history of Origin Effects and see how we got where we are today. 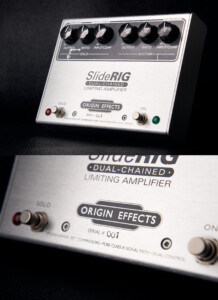 SlideRIG #001 was originally owned by Paul Barrere of Little Feat and later by session ace, Buzz Feiten. It now resides at Origin Effects HQ after being reacquired by Simon Keats.

It all started with Simon Keats. Having developed an interest in modifying amps as a teenager, he studied electronics before going on to work for the likes of Focusrite® and Korg®, including designing products for Vox®. Not long after, Simon found himself repairing a pair of Urei® 1176® studio compressors and chasing a tone he’s had in his head for years – the distinctive slide guitar tone of Little Feat’s Lowell George. This unique tone owed its infinite, clean sustain to these widely used studio compressors, “daisy-chaining” them in series for a very squashed but very controlled lead sound.

Simon quickly realised that this was a sound reserved for the studio, far beyond the capabilities of the compressor pedals of the time. So, he set out to make a pedal that would come to define Origin Effects, a compressor pedal that exactly recreated the behaviour of those 1176® rack units, putting the sound of one of the music industry’s favourite compressors in the hands of guitarists. This pedal was the very first SlideRIG; a dual-stage compressor in a single box that nailed that Lowell George tone.

Next came the original Cali76, a true-to-life replica of the 1176® sound, with all the precise control of the studio units. This soon became a range of compressor pedals with variations of this circuit including features such as, transformers, germanium boosts and parallel compression, all sharing the now collectible “big box” format.

It didn’t take long for word to get around either, with early Origin Effects users including Ed O’Brien (Radiohead), Graham Coxon (Blur) and the mighty David Gilmour (Pink Floyd). The blurred line between pedal and studio gear also attracted users who blur the line between player and producer, such as Adam “Nolly” Getgood of Periphery, who is often mentioned when the topic of Origin Effects in the studio crops up.

As the company grew, the pedals shrank, with a compact range of compressors introduced in 2015. Advances in our manufacturing methods meant that we were able to squeeze all the tone of the original Cali76 into a much more “pedal-sized” pedal, spotted on countless pro boards since. Things have grown even more since, with the 2018’s RevivalDRIVE pedals ushering in a new line of Analogue Amp Recreation pedals, and the recent BASSRIG and Halcyon pedals already taking pride of place in many a rig!

The latest incarnations of our compact compressors are still firm favourites among guitarists, bassists and producers, and it’s these pedals that are getting the anniversary treatment. The Cali76 Compact Deluxe, Compact Bass and Stacked Edition, as well as the SlideRIG Compact Deluxe MK2 are all now available in a slick, limited edition, laser engraved aluminium finish. Inspired by the subtle, stripped-down look of our in-house prototypes, these pedals feature the same highly-acclaimed circuits our compressors are known for, with a look that tips its hat to ten years of uncompromising tone chasing.

The Cali76 models are limited to 250 pieces each, while the SlideRIG Compact Deluxe MK2 is limited to 100 pieces. Contact your Origin Effects dealer now while stocks last.