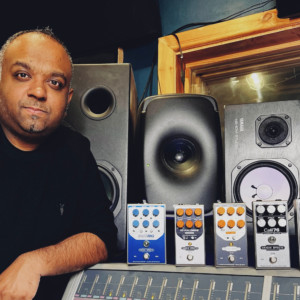 Who are you and what do you do?

I’m Romesh Dodangoda. I’m a record producer & mixer from Wales, UK mainly working in rock music. I have a private studio called Long Wave, situated in Cardiff, which is where I do the majority of my work, but also love travelling to various studios depending on the project. I’ve been doing this for over 20 years now and really love everything about it. It’s such a pleasure to work with amazing artists and I think making music is always so satisfying when you hear the final result of everyone’s work. I also run an online audio community called Control Room which is a lot of fun too!

Where did you start from, what’s your musical origin story?

I guess it started when I picked up the guitar. From there, something happened and I got this bug and became obsessed with music. As most guitarists do, I started going down a hole with guitar sounds and how they were achieved and I think that’s what sparked the fire in getting into music production. I would spend hours and hours trying different things out with guitar pedals, amps and micing techniques to get as close as I could to the sound in my head, still something I do now I guess. As most guitarists do, I would always love to record myself playing or making songs and this is what took me into what I do now. I started buying small, basic pieces of recording equipment and seeing how far I could push them to get the sounds I was trying to achieve. As things progressed, I started recording my friends who were nearby so I could practice and take my playing out of the equation. At this point, I felt I was starting to get somewhere and this is what started to take things further for me. I think people heard the recordings I was making and I started getting more and more phone calls from bands wanting to have that sound. I converted a small garage in the side of the house and that’s where the first Long Wave studios started. I now have a multi-room studio in Cardiff which has a main Studio A control room with a big live room and then a second Studio B smaller room which I mainly use for mixing and also vocal recording.

What have been your biggest projects and what was it like working on them?

Working on a Motorhead record was pretty amazing! They are such a household name and it was a real honour to be able to get involved. I have done a few projects with the UK rock band Bring Me The Horizon, which led to two Grammy nominations for Best Rock Album (Amo) and Best Rock Single for Mantra. It was also a number 1 record, which was really great to see! Recording Amo involved two months out in sunny California which was nothing to complain about! I had access to whatever I needed in the studio and it was nice to be able to spend time on creating cool sounds rather than just doing what was the usual. Recently I produced and mixed a great band called Nova Twins and worked on a bunch of tracks for their record. It has just been nominated for a Mercury Prize, which is fantastic news and I am really pleased about that.

What do you enjoy most about being a producer?

I think it’s just such a unique job, every day is something different and that keeps it so much fun. I am such a nerd when it comes to technology too and engineer all my records so I’m always taking it back to when I was starting out – the whole idea of getting the sound in my head to come out of the speakers. That can sometimes be easy and sometimes it’s a hard process, but the result is always so rewarding when you hear it back. I love working with bands and I also love being locked away on my own mixing. You can be creative in both of those environments and that’s what I love about it. It’s such a great privilege to be able to work on music every day and for it to be your job.

As somebody who works with a lot of guitar music, how do you go about choose the right gear for a recording?

I’ll always listen to the band and see what they’ve done before to get an idea of what we should do. I’m also happy to just find something new and push the boundaries into something fresh for the band if they’re up for it. It depends on the band but, almost all the time, the band are very happy for me to do what I think will work, tone-wise, and then the band may help me refine that so it’s perfect for everyone. I have a lot of amps, guitars and pedals in the studio and I know what they bring sonically so it’s really easy for me to just be like “I know what will get us this sound” and we’re there. One thing that really changed my life was getting an amp switcher. I will never record guitars without one again! The ability to have all my amp heads connected to a switcher and just switch different amps while the guitarist is playing is just the best thing ever! You can immediately hear which amp is helping to make the song or part sing without stopping and unplugging heads every time you want to try something.

The combination of gear just comes from years of figuring out what I love the sound of, really. Being in this job is just one continuous journey of discovery!

Tell us about Control Room

Control Room is an online audio community and it’s for people of all levels of experience. I started it because I kept getting a lot of questions about production techniques and how certain sounds on records were achieved. I was also tired of the misinformation around on the internet, either by YouTubers or people that just wanted to sell you their products. Control Room is a platform where we constantly have honest discussions on techniques and products, and just help inspire people to try new things out! We have some of the world’s most incredible producers in there who are so generous with their knowledge. One of my favourite moments ever was one of our members asking about an Ed Sheeran vocal sound and the first reply was “Hi, I actually produced this song, here you go”, with a screen shot of all the plugins and settings they asked for. That’s unreal! I wish I had this when I was starting out, so it’s great to also have members who are starting their journey to pass the knowledge onto.

We have live streams time to time with some really great producers and mixers including Mike Crossey (The 1975), Chris Sheldon (Foo Fighters), Emre Razamanoglu (Noel Gallagher), Adam Nolly Getgood (Architects), Dave Eringa (Manic Street Preachers) and so many others. Even if you’ve been doing it a while like myself, I always find new inspiration in Control Room and pick up things from just the conversations that happen each day. There are also multitracks to download, free drum samples, and just a ton of members’ deals for plugins, hardware and even things like 45% off microphones. The big savings pretty much pay for the small membership cost by itself!

How do Origin Effects and our products fit into your work?

Wow, so the Origin Effects pedals have been a game changer for me! I can’t believe the quality of the sounds that they’ve managed to fit inside a pedal. I first became aware of Origin from the Cali76 compressor pedal. As most people in the recording world know, the 1176 is pretty much the holy grail of compressors. It’s just got this super unique sound and you’ve heard it on 99% of records you own. Having that in a pedal was just amazing for me to be able to shape the guitar before it hit the amp stage. I particularly love it on clean and crunch sounds where you can really make parts stand out with it.

The drive pedals are also simply incredible. It’s hard to believe that you can just plug your guitar into a pedal and then into a cab sim and get such a real analogue guitar sound like that. I remember, as soon as I heard it, I said “whoever designed this is a genius”! My favourites are the RevivalDRIVE Compact and the DELUXE61. I did a short Instagram clip not long ago of my telecaster just straight into the DELUXE61 and into a cab sim with no amp and everyone was replying, so impressed with the sound of the pedal. It’s not even a pedal, it’s pretty much an amp in a box! I think it’s great that Origin have made record-ready sounds so easily available to anyone and it allows them to focus more on the playing rather than being distracted by trying to make it sound like they want it to. The pedals do that for you!