With a smooth and responsive tremolo sound, and rich overdrive tone, RevivalTREM faithfully recreates the dynamic, musical character of one of the great amps of the early 60’s: the brown Deluxe.   Featuring a wide range of clean and driven tones, and the natural dynamic response of power valve bias tremolo, RevivalTREM brings an array of classic sounds to your setup—and includes a host of modern features for pedalboard-friendly flexibility.

DISCOVER MORE ABOUT THE REVIVALTREM

Smooth, deep and rich, bias tremolo is considered by many to be the pinnacle of amp trem sounds. Bias tremolo works by varying the voltage at the amplifier’s power valves, where it interacts with your playing to give the effect its unique character and magical dynamic qualities.

Optical and VCA tremolo designs impose themselves on top of your playing, while bias tremolo has the capacity to respond to it. As power amp gain increases, loud notes and chords rise above the effects of bias modulation. Digging in harder allows you to “play over” the tremolo effect, before letting it fade back in as the notes die away.

RevivalTREM’s amp-like circuitry reproduces this effect exactly, down to the complex interaction between gain, playing dynamics and harmonic content. 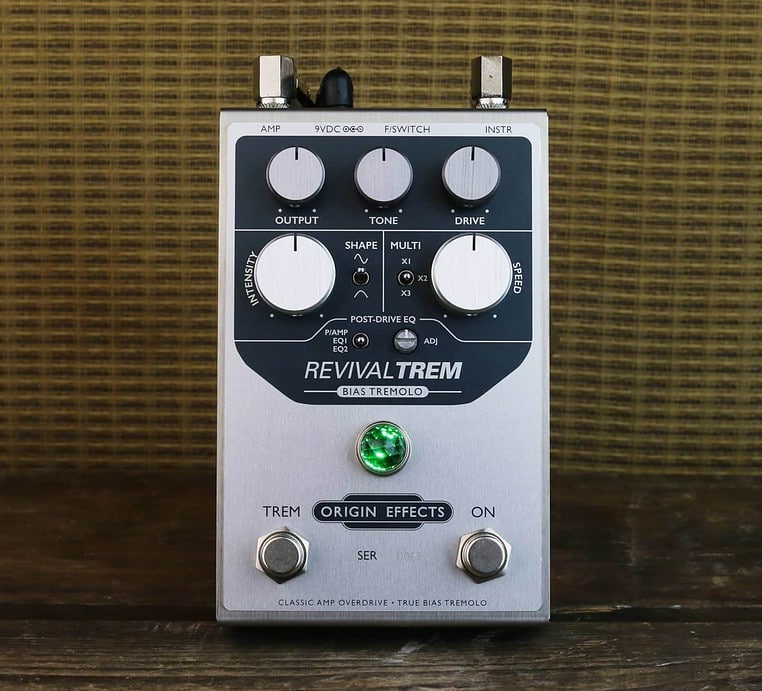 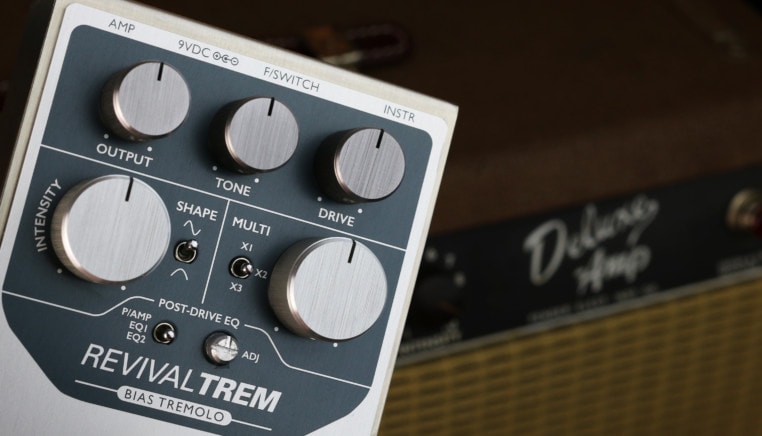 RevivalTREM contains a complete valve amp-style signal path with dedicated class-A preamp, a long-tailed pair phase inverter, and a push-pull output stage. Painstakingly modelled on our 1961 brown Deluxe, RevivalTREM benefits from Origin Effects’ Reactive Drive technology, and is the only pedal to bring you the sound of power valve bias tremolo.

With the Shape switch in the Sine setting, RevivalTREM recreates the sinusoidal LFO waveform that makes vintage amp trem so smooth.

The Full Wave setting features an asymmetrical shape and higher duty cycle. This waveform has a characteristic ‘hump’, with a longer ‘on’ phase and a shorter ‘off’ phase—especially useful at slower speeds to add movement without obscuring your playing. 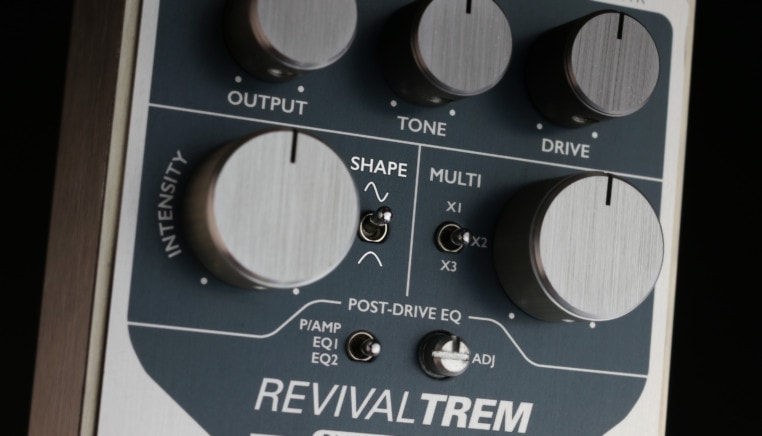 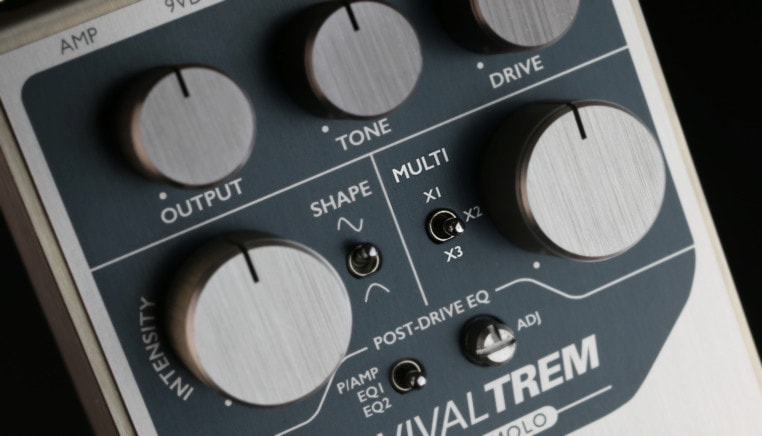 RevivalTREM goes far beyond the limited Speed settings of vintage amps. Use the Multi switch to shift the range of the Speed control or set rhythmic subdivisions. See the speed flash in real time on the Jewel Indicator.

RevivalTREM even includes a touring-friendly Power Amp Mode for compatibility with flat-response power amplifiers, so you can keep the show on the road whatever happens. 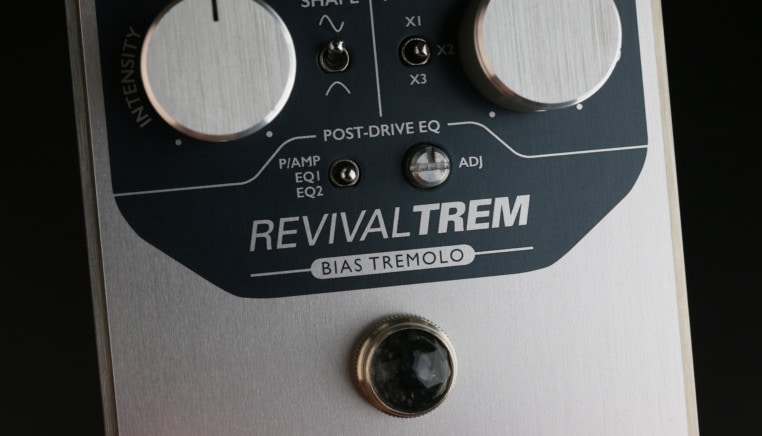 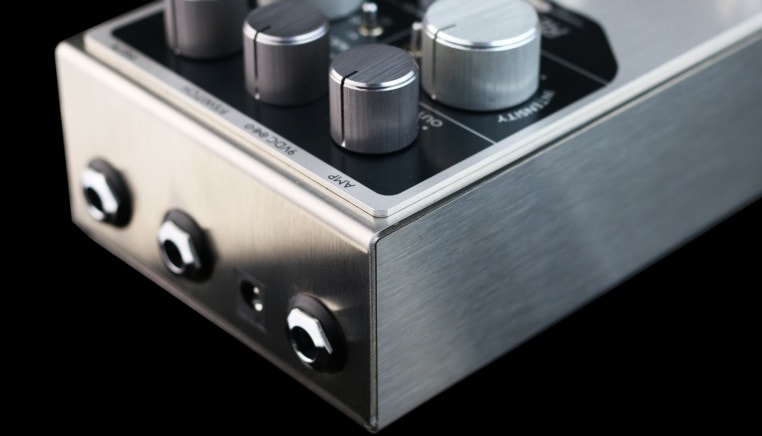 BUILT FOR THE ROAD

Housed in a hand polished, brushed stainless steel enclosure and furnished with aluminium controls, Neutrik jack sockets and heavy-duty footswitch, the RevivalTREM is at home on the road as it is in the studio.

Please note: the RevivalTREM is powered by a mains adaptor only (not included). We’ve dispensed with the usual 9V battery option, both to save space and to allow us to adopt a high-current approach, yielding lower noise levels and superior tone.

Origin Effects pedals are designed to deliver impeccable performance using a range of power supplies. We recommend you only use a regulated power supply specifically designed for guitar pedal applications as power supplies which do not have sufficient internal filtering can result in unwanted noise.

We recommend the following power supplies for use with our pedals:

This product should only be operated at 9V. The design employs a voltage doubling circuit to achieve higher internal voltages for improved sonic performance.

Please note that local duties/customs/taxes may be applicable on the shipment to your country. These are not covered and you will be responsible for payment (if any). You may cancel your order any time by contacting us.

Only Left!
Preorder Today
Coming Soon!
Call to order!
We're sorry, but this item is unavailable.
Free -Day Shipping
Get it by when you order within
Get it if you order in Price:
×
Faster Shipping

This is another Exceptional Pedal from Origin Effects ! I received the pedal last night and had some time to get acquainted with it. It does absolutely everything you see in the videos and as it is described, but until you play one for yourself it is difficult to put into words. The response of this pedal is extraordinary! The Drive section sounds tremendous and the tremolo section has so many variables you could play for hours. The pedal was actually inspirational and challenged the way I'm use to playing . The pedal promotes good timing and simply sounds wonderful! Highly recommend this as well as the Cali-76 TX and the Slide-Rig.

I got my RevivalTrem yesterday. It's is just uncanny how much it sounds exactly like my 1961 brown Deluxe. You can use it as just a "sound alike" as the Trem is foot-switchable in or out. I'm just stunned how great this sounds as side by side with my "real" 1961 brown Deluxe it's identical!!
I don't know how they did this, but it is just the F'in coolest! The Trem is pretty stunning as well as you can have a smooth sine wave or a full wave with full control over the intensity and speed.
Anyway, I'm sure someone will come along and write a better overview/review. But I am just stunned, floored, over the moon with how great it is. Looking forward to a couple of band rehearsals this week to give it a real go! Gonna crank it up and give it some welly!
Simon Keats is one sick cat who know how to make stuff I like and plus he's a really nice chap! I did pay for this pedal! I'm happy to give him my money for quality pedals like he makes! Anyway, don't take my word, try one your own self!!